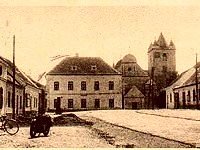 Prosiměřice´s „poppy head“, meaning the top of the church tower in Prosiměřice, was for a long time hiding a mysterious box with documents and papers, which revealed and completed of many historical informations of the village.

Travelers club GLOBE was founded in this small village by two gentlemen Mr. Hladík and Mr. Polák. If you like to travel and tourism, come to Prosiměřice last weekend in October to annual international meeting called Cesty (Journey).

The same club is a founder of another original action: Prosiměřice´s Jurta. This action takes place in odd year in June.

But we can not forget the wine, which thrives here almost 500 years.

Historical monuments in the village Prosiměřice

Prosiměřice´s „poppy head“ – in 1996 when the local church of St. Giles was in the „poppy head“ found a box with unique documents which were put in there during other repairs of the church in 1839, 1894 and 1926. The entire set included 101 pieces of various material such as documents, banknotes, coins, photographs, badges. These objects are stored in Southmoravian Museum in Znojmo and is accessible for those interested in local history.